Simon Anholt spent the last two years compiling The Good Country Index to determine which of the 125 countries contributes the most to the common good.

Today the biggest challenges facing humanity are global and borderless: climate change, economic crisis, terrorism, drug trafficking, slavery, pandemics, poverty and inequality, population growth, food and water shortages, energy, species loss, human rights, migration … the list goes on. All of these problems stretch across national borders, so the only way they can be properly tackled is through international efforts. The trouble is, most countries carry on behaving as if they were islands, focusing on developing domestic solutions to domestic problems. We’ll never get anywhere unless we start to change this habit.

Good Country Index isn’t interested in how well countries are doing, it’s interested in how much they are doing. The concept of the “Good Country” is all about encouraging populations and their governments to be more outward looking, and to consider the international consequences of their national behaviour. The Good Country Index isn’t trying to make any moral judgments: “good” as a measure of how much a country contributes to the common good. So in this context “good” means the opposite of “selfish”, not the opposite of “bad”.

The Good Country Index’s aim is to urge governments to look at the total impact of their policies. It’s no longer enough to provide prosperity, growth, justice and peace to one population alone: the international consequences of every action must be considered.

The top 10 countries of the index: 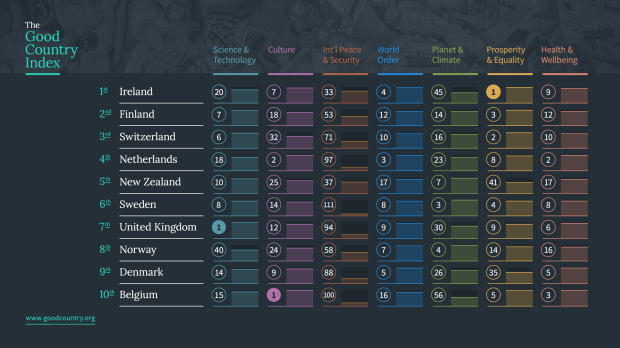 The Country which does the most good for the planet is Ireland, the most prosperous and equal country of the world.

The United States of America stands at the 21st position because it is selfish when it comes to the International Peace and Security indicator.

Italy, instead, stands at the 20th position, for the same reason of the USA: when it comes to the International Peace and Security it does not the common good.

China is at the 107th place: seems to be good at International publications of science and technology, but for all the other indicators need to work harder.

Sources of The Good Country Index

What do you think of the Index, do you agree with the project and the results?